When you plan a trip to Japan, you will inevitably question yourself about transportation, especially in train. Then, you will ask yourself about the famous Japan Rail Pass or « JR Pass » … And when you will dig into it a bit more, you will feel more and more lost, nay more and more anxious because you will may not know which one to choose, how it is working or simply if it is right for you !

To make it simple, it is a ticket which allows you unlimited train rides (and sometimes others transportation kinds) of  the JR national company of a chosen region for a limited duration.
BUT under certain terms :
1. Train categories or train lines are already selected
2. Duration is calculated in consecutive days
3. Unreserved seats are always included but reserved seats are often excluded

The most famous one is the National JR Pass, which allows you to travel throughout the whole country for 7, 14 or 21 days. But there are also Regional Passes that less people know about or are afraid to use. There are categorized by regions, and allow unlimited use only in the chosen region ! And to make things a bit more difficult, there are several types or Regional Passes among a same region from 1 day to 7 days duration … everything to make you feel dizzy !

I thought about it hard for hours and hours of research so let me help you with this !

To sum up, choosing one or few JR Passes breaks down into several steps :
1. Having your itinerary « mostly » defined
2. Making a comparison with unreserved train tickets
3. Defined a JR Pass or not

You get it, it takes time and patience to understand and make profits at best of a JR Pass.

If I get back my own itinerary :

I thought that the easiest thing to do would be getting a 21 days-National JR Pass, starting it from D2 and ending at D22. Or maybe, only getting a 14 days-National JR Pass for 358 € since my last week will be mainly in Tokyo. Unless you are super crazy rich, you don’t have to think much about it … you will pay 449 € for the 21 days-National JR Pass. Yes, you read it right 449 € !! Being a lot of money and because I am not a rich heir of any kind, it would have been better for me that this Pass has been profitable. So, I decided to make a comparison of all train tickets if I had to buy it one by one.

I had to decompose my trip in 2 parts for trains : from Osaka Kansai Airport to Kyoto then from Kanazawa to Tokyo. The main reason is because there was no direct train from Kanazawa to Takayama. So, I got 2 Regional JR Passes during my trip.

Alright, but how can I compare ? With Hyperdia website ! English only, also available as an app. The efficiency is crazy whether in prices, time schedules, types of train …

Above all, make sure to untick Nozomi and Private Railway because they are not included in a JR Pass !

So, you have all informations about the trains, their numbers, their schedules … but what is important for us here is the price ! So automatically, the price is display up for reserved seats. As I said, it is not generally included in a JR Pass so it is better to base calculations on the least expensive, for unserved seats. And by simply change seat option, you will get this :

So I did it for all my travels from town to town. Then I made an Excel board with all the prices and Passes prices in Yens because everything is displayed in Yens and to make things simple …

And the result is clear … For 14 consecutive days of travel, the JR Pass was not profitable to me at all with a difference of 115 €, even with reserved seats ! So, I looked for other Passes which could make me save a bit of money on transportations.

As you can see, there was only 2 Passes that could interest me : the Kansai Hiroshima 5 days or le Kansai Wide area 5 days. The only difference is shown in the name, the second one could not allow me to go to Hiroshima.

So I chose the Kansai Hiroshima 5 days Pass which allows me to take train from D2 to D6 including the JR Company ferry to Miyajima and the JR train for Universal Studios. I didn’t know that this Pass would allow me to take the train to Universal … like what even being super prepared, details are missed !

For the rest of my trip, I decided to take an individual train ticket from Osaka to Kyoto. Regarding my hostel localization, the private railway ticket was the easiest to access and also not as expensive as I thought !

Then to go to Kanazawa, I activated my second Regional JR Pass : the Takayama Hokuriku 5 days Pass. It allows me to travel between Kyoto and Kanazawa by train … but also by bus from Kanazawa and Takayama as many times as I want.

After my comparisons, there was nearly no difference with or without the Pass, so why would I deprive myself ? Especially that with the Pass, I would get some flexibility for example, if I would want to go to Shikarawa-go twice !

Last but not least, the latest big travel was from Takayama to Tokyo … and sadly, there was not much choice. Either I took the train by making a detour through Nagoya or Toyama, either I took the direct bus from Takayama to Tokyo-Shinjuku. Whether it is one or the other, it would have been at least 5 hours transportation time so I decided to choose for the direct bus with Nohi Bus company. And the beautiful surprise of this choice was that we can see Mount Fuji for 30 minutes during the drive by clear sky ! And that, it is written nowhere 😉
(PS : You have to be in the first front row on the left to get the best view !!)

Before, as a tourist, you had to get it before arriving in Japan because there was no other way to buy it onsite. Now, you can always buy it before your arrival in Japan but also after you land in the country. Unfortunately, by buying them in Japan, they are much more expensive !

To buy JR Passes, it is online through certified sellers. You will mostly find the same range prices with a minor difference of few euros/pounds/dollars. After payment, the website sends you the JR Pass voucher which will be used to get the real JR Pass, usually at the airport (or other exchange counters). 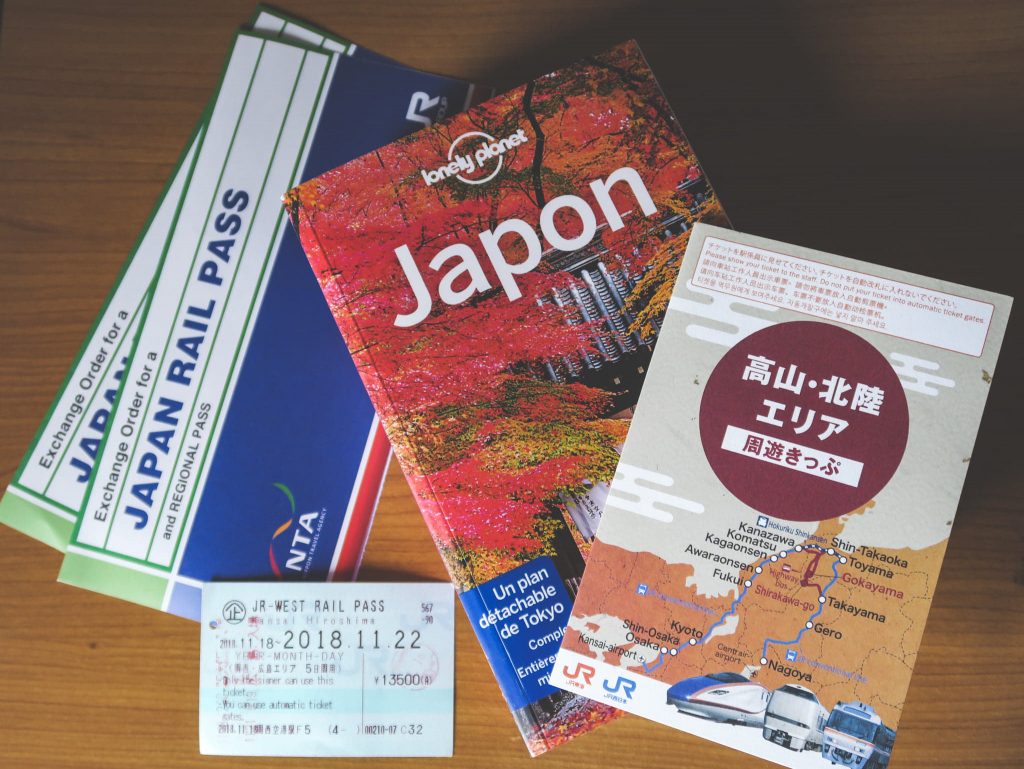 It takes about 10 days to receive your voucher, so don’t do it the day before departure !

There you have it. I hope this article will help you in your researches. I don’t pretend to have the best method but it is what worked for me and my trip !

It is not because people get JR Passes that you have to get them too. It eases you the travel but to what price ?

A day getaway to Miyajima