Universal Studios amusement park is located in the US (Los Angeles and Orlando), in Singapour and in Japan ! After being lucky to get to know this park in Los Angeles 3 years ago, it was certain I had to get to Universal Studios Japan at the end of November ! I just LO-VED my day at Universal Studios Hollywood. This amusement park is totally different of what you can find in France. It is more about attractions with 3D or 4D projection videos. It also includes classical attractions such as rollercoasters or kid rides. 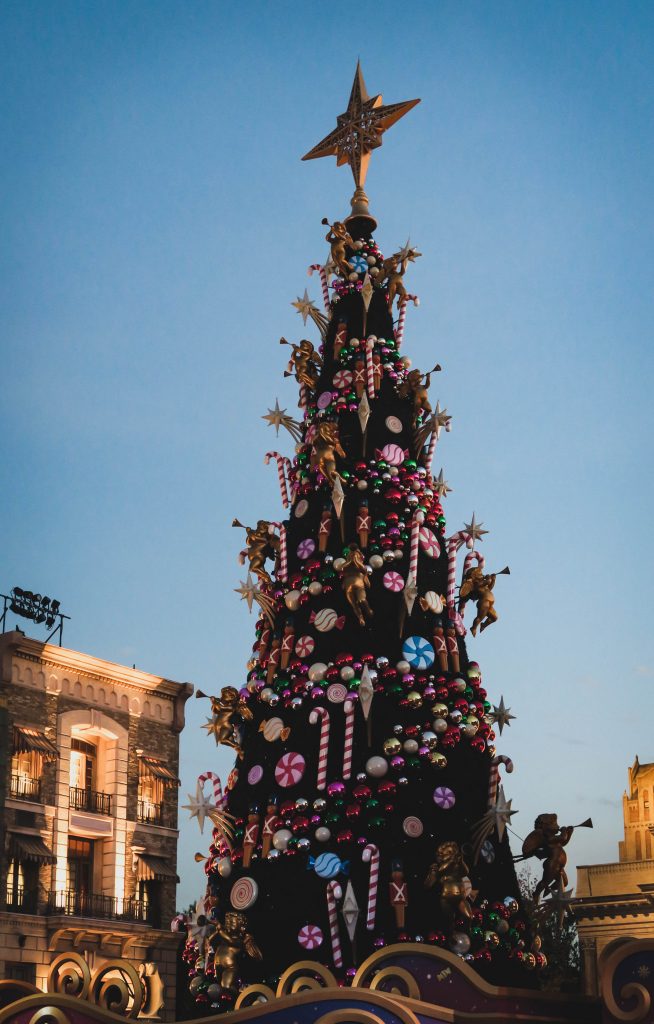 In Japan, the park is located in Osaka, accessible via Shinkansen from Tokyo or international flights thanks to Kansai Airport 50 km away.

USJ is outside Osaka, about 10 km from city center. You will have to get there by :
– taxi
– train : JR Yumesaki Line, Universal City stop

When you exit the station, there is only one way to the park entrance. First, you will have to walk through Universal City Walk, where you can find shops and restaurants. At the end of it, you will access to USJ’s entrance. You cannot lose yourself !

USJ is very very popular among the Japanese but also tourists from all over the world ! It is big enough but not huge neither. You will have to choose wisely your day by taking all factors in consideration. It is advised to go there during weekday from Monday to Thursday to avoid large crowd. Be careful of the weather, if USJ is included in a tight schedule and the rain is expected, maybe try to switch days. Also, see into Japanese vacations and public holidays. Local people tend to go during this periods. Same for touristic season, winter is less crowded than summer. 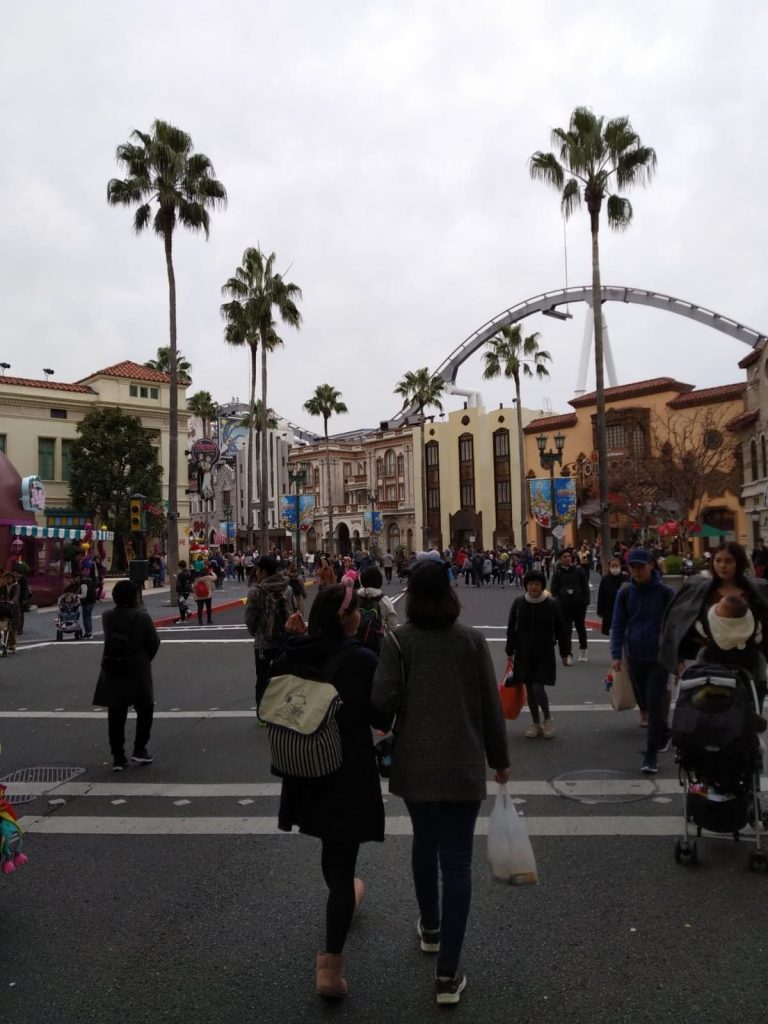 As for me, I got there on November Wednesday 21st and Thursday 22nd 2018. November 23rd is a public holiday, I prefer avoid this date. On those days, there were crowds but it wasn’t overwhelming.

You have to differentiate the entry ticket and the Express Pass for attractions. Those are 2 separate tickets.

As for Express Passes, these are no-queuing tickets available for certain attractions among the list selection. You will have the possibility between Express Pass for 4 or 7 attractions for 1 day only. It has its cost and sometimes not so profitable.

You have different ways to get your entry ticket for USJ :
– on site
– on their official website, Japanese only
– via an official reseller whose listed on usj.co.jp

My experience :
I bought an USJ 1,5-day ticket through the reseller Voyagin. It is perfect for those of you who don’t want to spend to much for a 2-days ticket. This ticket allows you access the parc from 3 p.m the first day and the entry the next day from opening hour. I choose not to buy Express Pass after my several researches online. I will explain later down how waiting went for attractions.
Warning, buying online will get you an exchange voucher for the real entry ticket. You will have to find an exchange counter in Osaka before getting to USJ. I exchanged mine at Kansai Airport at H.I.S counter.

The D day has finally arrived. It is 3 p.m and we are waiting in line behind doors. There is already people waiting but don’t come more than 30 minutes before. It will make no difference because the park will already be crowded (or super crowded). Once doors open, we go straight to Harry Potter World ! Beside that, I am amazed to be back in Universal Studios like it was the first time. Obviously, there is a lot of people here and I am expecting to queue a long time for attractions.

Tips :
If you are alone, know there is a Single Ride line apart. It might spare you some time (or not). The main line has priority on attractions. When 1 seat is available because of unpair groups, usually 3 or 5 persons, they fill the empty seat with you. But, if there is only pair groups, you probably might be waiting more than expected. That’s what happen to my brother on Flying Dinosaur attraction.

A 4D attraction which take you through all Harry Potter world in every theme of books and films. As absolute fan, I could only loved this attraction

Funny to be swinged throughout New York streets !

If you want to see Hagrid’s hut, you have to go to this ride which goes faster than expected !

The first day, we still managed to do 3 rides. As you can see, waiting times are not always accurate between real waiting time and one announced which was good news for us !

So the next day, from opening time, we immediately notice that people are not early birds ! Crowds usually arrive at 10 a.m !

This is one of the big rollercoaster ! And I usually like that but I did it anyway (with closing eyes) Warning, hat’s off !
It is on this same rollercoaster that The Backdrop is. Backdrop is same course but the car is in reverse mode … even more sensations !! My brother wanted to do Backdrop after the classic Ride but Single Ride is not allowed for Backdrop, so he did The Ride again ! Indeed, you have 3 waiting lines : The Ride entry, Backdrop entry and Single Ride line (only for The Ride but not specified).
How is it working ? There are 3 cars for Hollywood Dream : 2 for The Ride and 1 for Backdrop. You got it : after 2 passages for The Ride, there is 1 for Backdrop.

For once, I didn’t do this one too much sensations. You will be literally flying ! You body will be lay over the void ! From which the attraction’s name …
My brother did it by Single Ride, but no spot was available that’s why he waited so long. Beside that, he loved it !

Super fun attraction which will transform you into a Minion !

If there is one attraction which deserves its long waiting time is this one ! I don’t know the manga nor the story of Evangelion but the ride itself was CRA-ZY !
It is a virtual reality attraction ! I didn’t know it before queuing, it is only by the end of waiting I understood. And for that, I panicked 10 seconds before the beginning. We picture a lot of things about virtual reality but living it for real is totally different !! If you are claustrophobic, this ride is not for you !!

Short story :
I get into the car with my brother, it is not still, it is on speed-walk which scrolls. So you have to prepare for the ride pretty quickly while the car heads onto the start line. Once I have been held the virtual reality mask, I put it on, I see the picture of the virtual world and it is so cool ! I turn my head to see my brother and share it … but I can’t see him ! And I said to him “but where are you ?” by reflex. Obviously he was next to me. At this time, I panicked because I can’t see my brother, I don’t know when it starts or where I am actually. I only see the virtual world. And suddenly, it starts ! And it was so amazing !!! Maybe the best ride of USJ ! To do it again … some day !

It is not a ride, it is more a 10 minutes mini show where you live the scene of Harry Potter choosing wand !

Tips :
Start with the most popular rides : Evangelion, Minion Mayhem, Hollywood Dream, Harry Potter. Even if we didn’t wait that long for Harry Potter. Then, organize the others in your day. Below 60 minutes waiting, you can consider it is not too long to wait and I advise you to queue for the ride. Think about doing rides by the end of the afternoon when people get ready for shows, the night parade and The Gift of Angels III in winter. However, keep in mind that some rides close no later than 30 minutes before closing park.

From November to beginning of January, the park is decorated for Christmas Edition ! On this occasion, « The Gift of Angel III : The voice of an Angel » show mixing songs, dance and game of lights, is played every night by nightfall ! Let me say it it was A-MA-ZING ! If you are lucky to go to USJ during Christmas Edition, do not miss this show !! You will find all show schedules on their website. According to dates, there might be 2 shows during the same night ! And because in Japan, everything is well organized, 3 areas have been mark out to watch the show :
– VIP area : on bench in height, in front of stage (paying)
– premium area : sit on floor in front of stage (paying)
– free area : sit on floor on the sides, possible not to see the entire stage

Try to arrive 30 minutes before to get a correct space. Some are there more than 1 hour in advance, especially for the free area, to have the best seat possible.

At the same period, you will have the « Hogwarts Magical Night » show. It is a game of lights and sounds show projected on Hogwarts Castle for 10 minutes. It starts at nightfall and several shows are played until closing park.

Universal Studios Japan’s parade is held at the end of the day. It happens all year long but pay attention to the calendar schedule, the show is not played everyday ! No need to rush for a spot, space for everyone ! 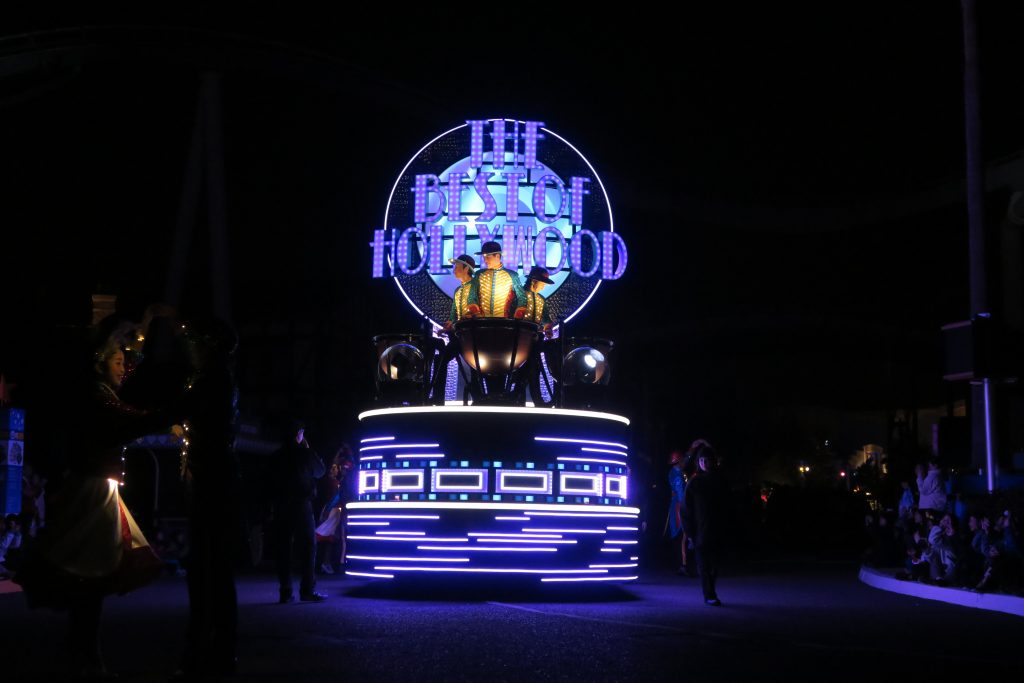 Universal Studios remains my favorite amusement park ! I hope some day we can find it in France ! Anyway, despite all advices and tips, the most important is to have fun there ! It doesn’t matter if you don’t get to do it all, enjoy most of every moment in the park ! You might not get the chance to come back.

As for me, I will go back there for sure 🙂